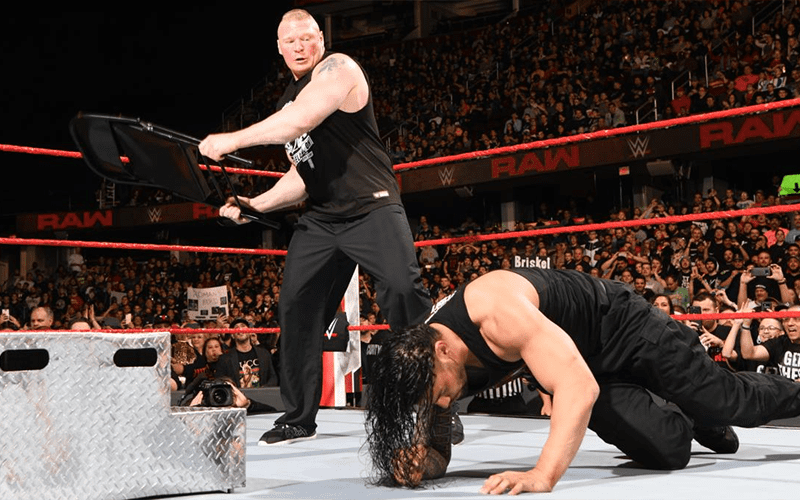 While discussing the on-going feud between Brock Lesnar & Roman Reigns on the latest installment of PWInsider Elite Audio, Mike Johnson indicated that WWE is now attempting to book Reigns as an underdog babyface going into his match against Lesnar at WrestleMania. This would explain why the company has been having Reigns get trashed by Lesnar for the past two weeks.

“They talked about, and this might be a story that they follow up on in the days and weeks to come that Roman could not be 100% going into WrestleMania on April 8th given the beatings he has taken the last couple of weeks. If he’s going to be the underdog fighting from behind and coming back from underneath this monstrous beast Brock Lesnar, there is going to have to be some reason that he has something that is sore or injured that Brock is going to have to beat on so Roman can sell and try to get the audience to engage to see him make the comeback. The problem is the type of audience that’s assembled at WrestleMania is not traditionally your babyface/heel audience and they’re really going to have to come up with something great to make things really step up out of the box.”

As previously reported, Dave Meltzer indicated on Wrestling Observer Radio last week that WWE has been trying to get fans to turn on Brock by booking him as a heel by having him “miss” WWE events and portraying him as someone who doesn’t care about the business. However, the belief is that the plan will still backfire, given the reaction he received recently at the MSG event recently.

The belief is that Madison Square Garden crowds are “ahead of the curve” and fans in attendance were cheering Lesnar and it’s very likely that it’s going to happen at WrestleMania 34 as well.

“Brock wrestled a three-way with Braun Strowman and Kane. So I guess the interesting thing is that Brock Lesnar was the most popular guy on the show, so all this stuff to turn audience against Brock Lesnar — now of course Madison Square Garden is a unique audience. When it’s Toronto it’s bizarro land and when it’s New York, it’s ahead of the curve or whatever it is even though they are very similar but WWE looks at them completely different.”

If that’s any indication, Brock Lesnar is going to get cheered at WrestleMania.

Do you think WWE will be able to successfully book Reigns over well enough to have him cheered at WrestleMania or will the plan backfire? Sound off in the comment section below…