Russo is joined on today’s show by Glenn Gilbertti (Disco Inferno) and his co-host, Jeff Lane.

Gilbertti comments on the recent drama between Ryan Satin, Russo and Lane. Gilbertti feels that Lane shouldn’t have went back and forth with Satin and his followers on Twitter. He thinks Lane should have invited them on one of Russo’s shows to discuss the drama, and left it at that. He points out that you’d think these people who openly criticize others would love the opportunity to discuss it in person. Russo informs that he asked Satin to come on the show, but he declined.

Gilbertti then urges all of his followers to just ignore Satin. He points out that a few people have threatened to meet Satin at upcoming indie shows, and he urges people to stop that stuff. Russo and Lane agree, with Lane pointing out that those types of words are uncalled for. 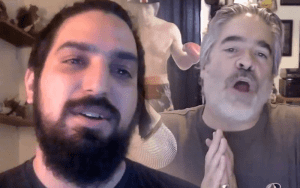 Gilbertti, Russo and Lane discuss Daniel Bryan’s return to the ring. Gilbertti points out that it’s easy to see why Bryan is so popular when he steps in the ring. He’s a ball of fire and a “tough little S.O.B.” Gilbertti adds that Bryan looked like he hadn’t missed a beat in the ring, and he just hopes that Bryan can adjust his in-ring style to protect himself moving forward.