However, WWE has a lot of major sponsors and he’s sure they’ll have to deal with some criticism from some sponsors. He notes that humans are great at forgiving and time heals all wounds. Hogan’s a cornerstone of WWE and Ryback thinks Vince McMahon will always be grateful and appreciative of what Hogan did for his company.

Ryback informs that he saw the Ultimate Deletion last Monday on RAW and he thought it was good. He’s getting a sense that Matt Hardy and Bray Wyatt might soon be teaming together, and he thinks that’d be a great idea. It would add a new dynamic to Wyatt’s character, and it would allow WWE to do some comedic things with Wyatt. 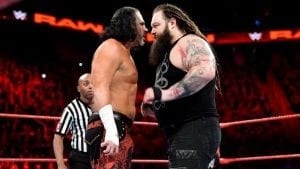 Ryback comments on the news that Mark Henry will inducted into the WWE Hall of Fame Class of 2018. He points out that you won’t find many people who’ll criticize Henry, and he really enjoyed his time working with him.  Ryback recalls Henry teasing a retirement several times over the years, telling all of his co-workers that he was getting ready to hang up the boots. However, Vince McMahon would always convince him to sign for another year, and then another year, and so on.

He also points out that Kid Rock will be inducted into the Hall of Fame this year. People love to criticize nowadays, but Ryback thinks this makes perfect sense from a business standpoint. He also notes that this opens up the option to have Kid Rock perform Undertaker’s “American Badass” theme live at WrestleMania this year. Ryback thinks it’d be cool if WWE did that, but then had Undertaker’s “Deadman” theme start right after. Undertaker would then come out as the Deadman. He thinks a mix of themes like that would be pretty cool.