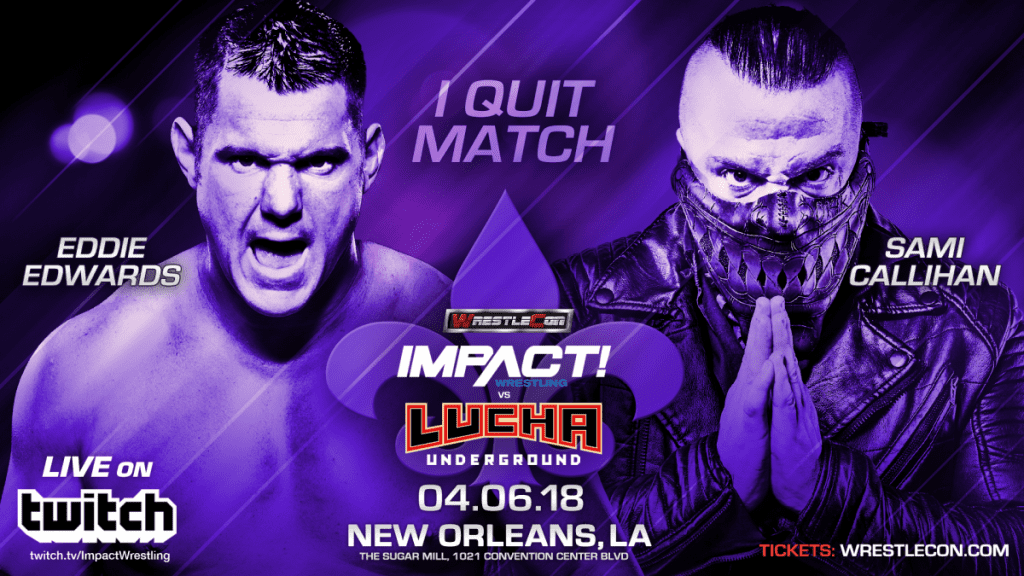 Impact Wrestling announced that Sami Callihan vs. Eddie Edwards would take place at Wrestle Con during the Impact vs. Lucha Underground event. Here is the announcement:

I Quit. Or getting someone to utter the words, “I Quit” is one of the most humiliating things you can force another competitor to say. To get your opponent to the point where they can’t take anymore, that you have bested them and all that is left is to give up, to quit. How is your resolve? How far are you willing to go? What do you have inside you that keeps you going? When the world is watching, when eyes from all corners of the globe are on you, what would you do? Would you quit?

As announced minutes ago on the weekly IMPACT Media Teleconference in New Orleans at WrestleCon it will be Sami Callihan going one on one with the returning Eddie Edwards in an I Quit Match. The only way to win is to get your opponent to utter those two embarrassing words, “I Quit” in front of everyone. In front of everyone watching in New Orleans and everyone watching around the world on Twitch, Live!

If you haven’t already, you can still get tickets for WrestleCon HERE and see this match in person. You will also be able to watch on Twitch when it all goes down in New Orleans for WrestleCon weekend. The Big Easy will not be the same after Sami Callihan and Eddie Edwards go one on one in a grueling I Quit Match.

Eddie Edwards is Mr. Anything is Possible, he die hard and all day tough and keeping Eddie down will be nearly impossible. Callihan is violent, vile and there is no telling how far Sami will go in his quest to end the career of Eddie Edwards. The baseball bat shot was just the beginning and this match will not be for the faint of heart.

Sami refuted that this match will be happening on the Teleconference, but as of this writing, we can confirm the match is happening. Eddie Edwards vs. Sami Callihan in an I Quit Match at WrestleCon is set for Friday, April 6th in New Orleans.