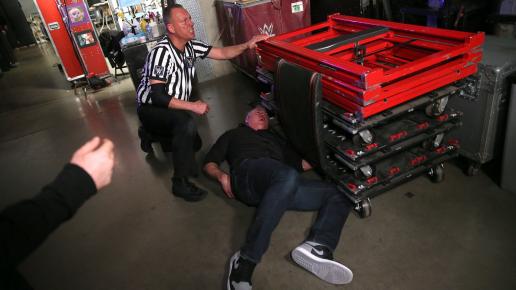 As seen on Tuesday’s episode of SmackDown Live, Shane McMahon announced that he was taking an indefinite leave of absence from his job as SmackDown Commissioner and also announced Kevin Owens vs. Sami Zayn for WrestleMania this year.

The show ended with Owens & Zayn attacking Shane, with Shane being stretchered out after the attack continued in the backstage area. WWE reported that Shane suffered a laryngeal contusion, trapezius and rhomboid strains. Below is the storyline update from WWE.com.

After announcing he would be taking an indefinite leave of absence from his role as SmackDown LIVE Commissioner, Shane McMahon was brutally attacked by Kevin Owens and Sami Zayn, whom he had just placed into a match against each other at WrestleMania. McMahon suffered several injuries during the attack, WWE.com can confirm.

“He sustained a laryngeal contusion when the steel chair was wrapped around his head and thrown into the turnbuckle,” WWE medical staff said.

KO & Zayn continued the onslaught by dragging McMahon to the back and powerbombing him onto a metal rack, resulting in further injuries.

“He was then thrown onto the metal rack, which resulted in trapezius and rhomboid strains,” medical staff continued.

McMahon is currently being evaluated to make sure his airway is not compromised. Further updates on McMahon’s status are expected in the next 24 hours. Stick with WWE.com for more details as they become available.