Lane opens today’s show by mentioning that Pro Wrestling Sheet’s Ryan Satin has gotten himself into some legal trouble with Lucha Underground. Satin published an article which released some details of Lucha Underground’s recent television tapings, and the company was not pleased with this. Satin refuses to stop posting such articles, pointing out that he didn’t sign a non-disclosure agreement with Lucha Underground.

Gilbertti thinks this is an intriguing story, and he’s interested to see where it goes. He doesn’t think Lucha Underground has a case against Satin because unlike the talent, Satin didn’t sign a contract himself. Russo is of the mindset that once a show is taped and live audience members saw it, it’s out there. When he worked for TNA and they taped shows he knew full well that the results of those shows might be spoiled before it aired on television. 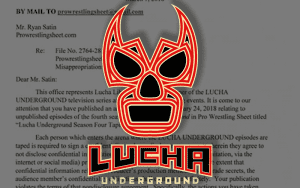 Gillbertti points out that there’s a case to be made for both sides of this story. Spoilers could prevent people from watching, or it could make them excited enough about a certain episode that they might tune in.

Lane points out that there were sexual harassment allegations made against Jonathan Coachman this past week. Russo is somewhat concerned about this from WWE’s end. He points out that WWE issued a statement saying that they’re investigating this because they take such matters very seriously, but Coach continues to work on RAW each week. However, when similar allegations were directed towards Rich Swann and Enzo Amore, WWE was quick to let both of those men go.