Russo is joined on today’s show by his co-host Jeff Lane, Bin Hamin, and Stevie Richards.

Russo opens today’s show by talking about the opening segment on RAW this week. He was confused by the fact that there was no other mention of this segment as the show progressed, and even when we saw Kurt Angle in the backstage area later in the show, he was acting as if the first segment of the evening didn’t happen. 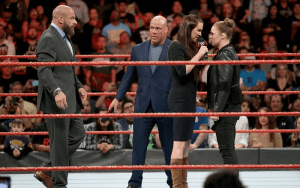 Of everything that was done in the segment, Russo gives credit to WWE in the end because he was happy to see Stephanie finally put somebody over. This is the first time he can remember Stephanie allowing a talent to get over on her in the last several years, so he liked the segment because of that. Richards spoils Russo’s happiness by pointing out that this just means Stephanie and Triple H will win at WrestleMania.

Speaking about Nia Jax’s presentation on RAW lately, Hamin is confused that WWE has decided to position her as a character we’re supposed to feel bad for. He points out that although WWE continues to tell us that Jax was bullied as a child, she used to be presented like a monster and we never saw King Kong or Godzilla crying. Lane disagrees here, saying that WWE wasn’t getting Jax over as a monster anyways, so he doesn’t have an issue with this adjustment to her presentation.