Gilbertti opens today’s show by wondering if there’s ever been a performer in WWE’s history that’s been booked stronger than Stephanie McMahon. Stephanie continuously gets heat on babyfaces and hasn’t given a nibble back to those performers yet. He finds it fascinating that even after Stephanie slapped Rousey in the face at the Rumble, Rousey still wasn’t able to get any offence in on RAW the next night. 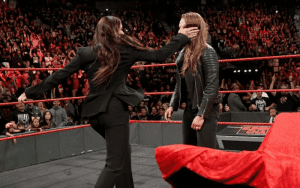 Gilbertti points out that there are reports circulating saying that WWE is trying to replicate the Vince McMahon/Steve Austin dynamic from the attitude era, but Vince McMahon would always sell for Austin. Vince would get heat on Austin for one week, and then he’d sell for him for several weeks in a row. At some point, Stephanie is going to have to give something back in order to get Rousey over.

Lane points out that some reports have emerged, saying that the rumoured match between Undertaker and John Cena at WrestleMania may be off the table now. Cena is now rumoured to be working against Rey Mysterio instead. Gilbertti points out that it’s very difficult to enjoy WWE’s shows when you already know how their stories are going to end.