On today’s show Lawler will address tweets from fans, but before that Moore asks Lawler if he’s ever had any concussions, and Lawler doesn’t think he has. He admits that the ‘concussion’ term wasn’t really a thing when he worked, and there certainly could have been performers with undiagnosed concussions during the 70s and 80s. 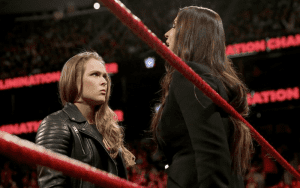 Lawler loved Ronda Rousey’s debut during the Elimination Chamber PPV on Sunday. He points out that showcasing Rousey’s Judo background by having her throw Triple H through a table was a great way to introduce her to the WWE Universe. He points out that the rumoured WrestleMania match between Rousey/Angle & Triple H/Stephanie would be “huge”.

Moore asks Lawler if he thinks there are any women backstage angry over the fact that Rousey just walked in though the doors and was immediately placed in a huge spot for WrestleMania. Lawler points out that it’s human nature to feel as if you deserve the main even spots. He’s sure there’s women backstage who feel like they’d draw just as much or more money than Rousey in that spot, but that’s a good thing. You need to have that kind of self-confidence in order to succeed in the wrestling business.