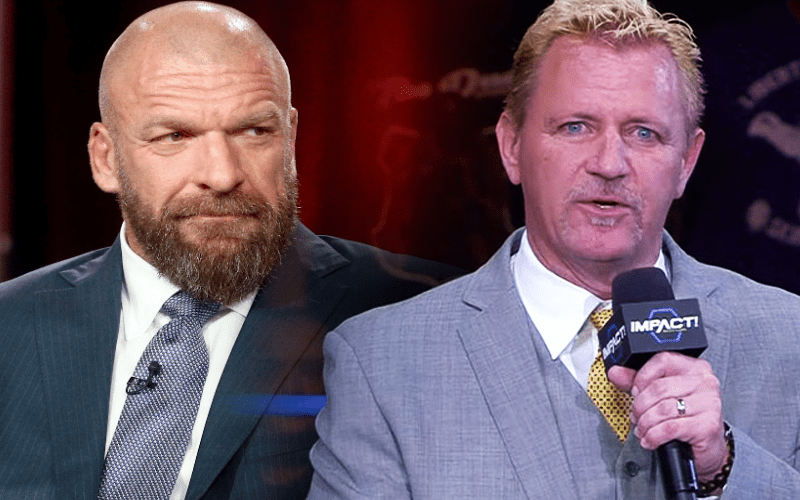 WWE announced earlier this week that Jeff Jarrett would be inducted into the 2018 Hall of Fame Class this year. Justin Barrasso of Sports Illustrated would later reveal in his weekly update that Triple H was the individual that pushed for Jarrett’s induction into this year’s class.

During the recent installment of WWE Backstage with Brad Shepard & Jon fisher, Jarrett’s status with the company was discussed and the belief is that Jarrett could have been brought back to WWE to be a part of Triple H’s team.

While Shepard was discussing the decision to bring Jarrett in and induct him into this year’s Hall of Fame class, he mentioned that he had received information that would indicate that more could be planned for Jarrett.

“It’s definitely something that came about this year. There was a list going around like he could be added. Mark Henry was on that too. Based on the information as to what they’re doing for him behind the scenes it would appear he’s joining as well but.. Yeah it was very surprising and the source had given me the Hall of Fame list was surprised by this. So the information kind of lead me to believe without going into specifics because I cant — that yeah it was something from this year but recently like last minute and when I say last minute, I don’t mean literally at the 12th hour of last week or something. I mean something this year and it would almost lead me to believe that it was in fact a Triple H influence. You know, Jeff is tied to Jeremy Borash, who was just hired to be a part of Triple H’s team. Kinda leaves me to believe that there could be some credence to that. That whole relationship and him bringing Jarrett over. There is a possibility and Jarrett is not just a Hall of Fame inductee but there’s more to that.”

When asked about a role on weekly television, Shepard indicated that it’s very possible but we will have to wait to see how things pan out.

“He could have a role in WWE behind the scenes or on TV, I think. We’ll see. Based on the information I have in the report it makes it seem like maybe he’s being brought in as part of Triple H’s team. I guess we’ll see. But it’s a surprise. It’s a total surprise and something that was not originally expected.”

You can listen to Brad Shepard & Jon Fisher discuss the Jarrett’s status with WWE embedded in the audio below: