Russo is joined on today’s show by his co-host, Jeff Lane and Glenn Gilbertti (Disco Inferno).

Russo and Gilbertti discuss the recent “heat” between Corey Graves and Booker T. Russo is confused that both men admitted that this was a work because there’s no payoff to this angle. It’s not like these two men can have a match on RAW to payoff their feud. Russo also believes there was some legitimate heat between the two men but they were told by WWE to squash the beef, and that’s why they came out this week saying it was a work. 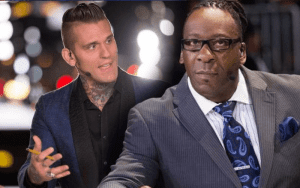 Gilbertti says he spoke to Booker T on another podcast recently and Booker guaranteed him that this was all a work. Booker added that he cut the promo on Graves on his podcast because he had some time to fill on the show and had nothing else to talk about.

Gilbertti informs that for the first time in months he watched all three hours of RAW live this past week. After watching the show he was convinced that WWE’s writers are either told to write the show for children, or they’re so uncreative that they write like children by accident. Gilbertti feels that the writing on these shows is so bad that it’s actually hurting the Superstars.