D-Von informs that he was thrilled to hear that The Dudley Boyz were going to be inducted into the WWE Hall of Fame as part of the Class of 2018. He and Bubba were told a while ago that they were going to be inducted this year, but he didn’t want to get his hopes up because he knows how quick things can change in the wrestling business. Once WWE announced their induction publicly, he figured it was safe to start getting excited. 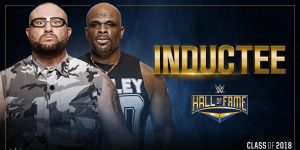 He talks about how important Paul Heyman and Vince McMahon have been to his career. He says that Heyman created The Dudley Boyz, but Vince McMahon moulded them into the Superstars they turned out to be. He has a tremendous amount of respect for both men, referring to McMahon as the “Yoda” of the wrestling business while pointing out that Heyman changed the course of the business in the 1990’s.

D-Von talks about the success of the attitude era. He informs that locker rooms were very tight back then, and while performers could fight amongst themselves, nobody from the outside stood a chance if they tried to get involved. This is why ECW and WCW stars faced such backlash when they first arrived in WWE.