Moore mentions that Booker T and Corey Graves had some “heat” which each other last week, even though he didn’t believe it at all. Lawler shoots down these rumours, mentioning that he never believed there was any heat between those two men for a second. He points out that there was similar rumours regarding him and Graves when Graves made his transition to the main roster, and there simply was no truth to those rumours. 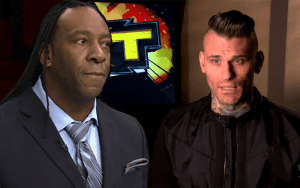 Lawler points out that it can be very difficult to call matches in a 3-man booth, not to mention the occasional 4-man booth. It’s very easy to talk over one another, creating friction at the table when the focus should be on calling the action in the ring. He adds that Michael Cole is great at “directing traffic”, making sure that all the other commentators at the table can get their thoughts in without everyone jumping all over each other.

Moore likes the job Graves has done since coming up to the main roster, but he still feels that all the commentators need to show more personality like Lawler and Jim Ross did back in the day. Lawler admits that when he watches old shows with him and Ross on commentary, he’s blown away by Ross’ enthusiasm and the way he delivers his words.