Lane opens today’s show by mentioning that WWE intends to use Ronda Rousey to help get Stephanie McMahon over as a mainstream star. Russo says he doesn’t buy Stephanie’s act and nobody else should either. Her charity work and her fake smiles aren’t believable to him at all, and he thinks it’s going to take a lot of great writers to make this story happen.

Gilbertti agrees and points out that WWE will never be able to replicate the situation they had with Steve Austin/Vince McMahon. The notion that WWE is actually trying to do so is ridiculous in his opinion. 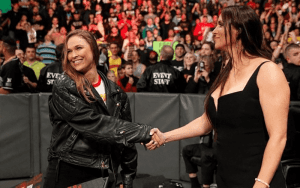 Lane points out that The Wrestling Observer’s Bryan Alvarez was very critical of WWE’s attitude era shows this past week. Gilbertti thinks it’s pretty obvious that Alvarez and most other dirt sheet writers are fans of the style of professional wrestling that will never appeal to mainstream audiences. On the other hand, they hate the attitude era’s programming because that was a mainstream show that appealed to millions.

Gilbertti also thinks that Alvarez is on a mission to be critical of anything that Russo did during his career in the business. Even if Alvarez enjoyed something about those old shows, he’d never admit to enjoying something that was written by Russo.