Edge and Christian open today’s show speaking about last weekend’s NXT Takeover and Royal Rumble events.  Edge thought the Johnny Gargano/Cien Almas main event was a finely crafted piece of art. Christian points out that Gargano is so good, and in their first big main event bout, they both delivered in the biggest way imaginable. His only criticism about this match is that Almas worked too much like a babyface. 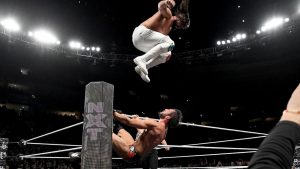 Christian says that if anyone wants to stand out in NXT, all they need to do is act like a legitimate heel. He doesn’t think any of the heels in NXT consistently act or wrestle like a real heel. By performing athletic moves and entertaining spots, NXT’s top heels take away from the babyface’s shine. Edge points out that if this program doesn’t eventually end with Gargano holding the NXT Title, they made a huge mistake by not having him win this past Sunday.

However, he does understand that Almas probably deserves a longer Title run than he’s had thus far. In addition, NXT has basically set up two main event matches for their next Takeover show – The NXT Title match between Almas and a babyface challenger (probably Aleister Black), and Gargano versus Ciampa.